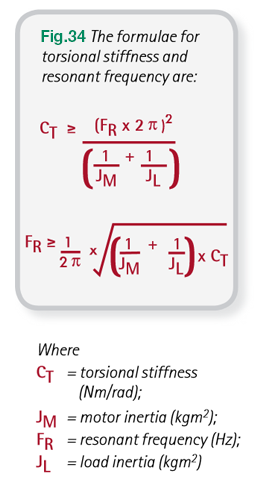 Torsional deflection is the inverse of torsional stiffness and is defined by deflection per unit torque. This also has many denominations but is best expressed in degrees/Nm. The conversion tables at the back of this booklet allow conversion from other denominations.

When used in a closed loop or velocity control system a coupling’s torsional stiffness becomes more critical and forms a contributory factor in calculating the upper limit of dynamic performance and stability. Therefore, the stiffness of a coupling should be such that its torsional resonance frequency exceeds 300 – 600 Hz, depending on dynamics. Stiffness is at its most critical when load inertia is dominant and becomes less so when that dominance swings in the motor’s favour. (See figure 34)