Torque is the angular force needed to overcome the resistance of a load. Rotating loads have both a frictional and an inertial component, and are classified according to whichever dominates. For example, the resistance encountered by a pump delivering fluid is a frictional load as the inertial part is secondary, assuming that the pump runs continuously at a steady speed. The total application torque comprises the frictional plus inertial elements. If the pump runs at a constant speed, it produces a uniform load and the required power would be given in kW or HP. The kW rating is related to torque by the following formula: torque Nm = kW x 9550 divided by revs per min.

Conversely, a ball-mounted slide table, typified by short cycles of rapid acceleration and deceleration in both directions of rotation, will have inertial loads as the predominant factor. These will determine the reversing torque factor of the coupling. 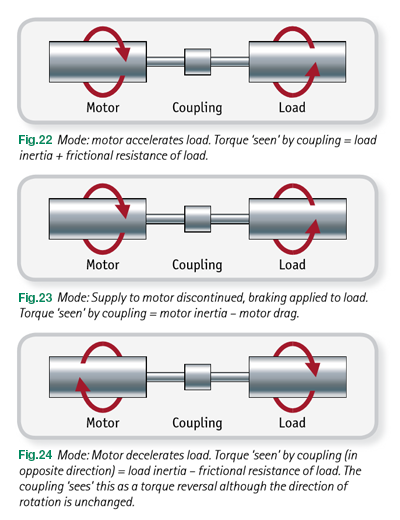 To be more precise, the maximum torque experienced by the coupling may be dictated by whether braking is applied by the load or the motor. In the following diagrams (fig 22, 23, 24) the arrows indicate the direction of the angular forces due to acceleration, deceleration or braking. Once the maximum torque in the system is known, the selection of the correct coupling can be made by relating it to the Peak Torque Rating. This can be found in the relevant table in the Huco catalogue. The coupling should be selected using the following formula: peak torque = application torque x service factor.

In the case of Huco couplings, the peak torque rating relates to the static reversing torque load sustained for a minimum of one million cycles under test conditions (zero misalignment).

Fig.24 Mode: Motor decelerates load. Torque ‘seen’ by coupling (in opposite direction) = load inertia – frictional resistance of load. The coupling ‘sees’ this as a torque reversal although the direction of rotation is unchanged.